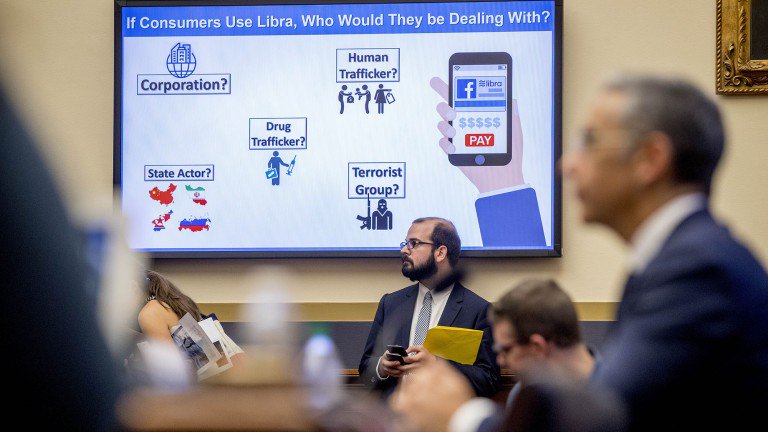 A flurry of new developments during the past few days related to Libra, Facebook’s proposed digital currency, has set the stage for the next round of political fighting over the project’s future. Just a few weeks after the company admitted to investors that increasing regulatory scrutiny could mean that Libra may never launch, the company now seems as determined as ever to get it off the ground—however long that takes.

Gearing up: Perhaps most importantly, Facebook has just hireda lobbying firm to focus on “issues related to block chain policy.” The social network has spent $7.5 million on lobbying so far in 2019, after spending nearly $13 million last year. Now it has added Washington, DC-based FS Vector, a firm that focuses on regulatory compliance and business strategy. One of its partners, John Collins, was formerly the head of policy at Coin base, the popular US exchange.

More details please: Facebook’s announcement two months ago that it planned to launch Libra was immediately met with skepticism from policymakers and central bankers around the world. They raised concerns about security, privacy, and the potential risk to financial stability. Critics have also lamented the lack of details regarding how the currency will be managed, sending Facebook back to the drawing board. Now the discussion seems ready for its next phase.

Continued resistance in Washington: Libra has taken fire from both sides of the aisle in DC, but one particularly vocal critic has been Maxine Waters, chair of the House Financial Services Committee. Late last week she met with Swiss government officials to discuss Libra, which Facebook has said will be managed by a Switzerland-based nonprofit called the Libra Association. After the sit-down, Waters said she still had concerns about “allowing a large tech company to create a privately controlled, alternative global currency.”

Internal resistance, too: According to a new report from the Financial Times, the increasing regulatory scrutiny has led some members of the Libra Association to grow wary as well. Three unnamed members have even been “privately discussing how to distance themselves from the venture” as pressure builds.

Part of the plan? Facebook has said that the back-and-forth with policymakers, regulators, and experts was what it was aiming for when it revealed its plans early. In that vein, today it also launched a bug bounty program that will pay security researchers up to $10,000 if they find critical bugs. “We know it will take a global community to launch a global cryptocurrency,” the Libra Association’s Michael Engle said in a blog postdescribing the program. “We are committed to taking the time to get this right.”

In today’s highly competitive world, BPE offers you, the unique combination of best in class service and state of the art Uninterruptible Power Solution.

In UPS and Power solution industry, BPE has the best of the product specifications coupled the latest technology, developed by in-house strong R & D and Technical team. This enables us to offer competitive prices, backed by all international certifications to prove product quality, for the entire UPS range of products.

BPE with its headquarters at Noida, India, was established in the year 2000. The company has strategically expanded itself step by step, year after year, by providing power solutions for IT, Industrial & Critical equipment, telecom, data centers & electro-medical gadgets.

Canon Inc. is a Japanese multinational corporation specializing in the manufacture of imaging and optical products, including cameras, camcorders, photocopiers, steppers, computer printers and medical equipment. It is headquartered in Ōta, Tokyo, Japan.

Epson India Pvt. Ltd. was incorporated in the year 2000. Epson products address the needs of homes, businesses and commercial enterprises as also those of consumers with specialized needs in India. With a commitment to providing products and services that surpass people’s expectations, Epson India today has an enviable reputation for quality and value. Headquartered in Bangalore, the company markets and supports Epson Inkjet Printers, Inkjet All-in-Ones, Point of Sale Printers, 3LCD Projectors, Scanners, Large Format Printers, Robots and Dot-Matrix Printers. In all of these categories, Epson is either the No. 1 or No. 2 brand in India, and growing fast.

Fujitsu, the fourth-largest IT  vendor in the world and the third largest for global IT services, is the leading Japanese information and communication technology (ICT) company offering a full range of technology products, solutions and services. Fujitsu Technology Solutions, part of the global Fujitsu Group, is the leading European IT infrastructure provider with a presence in all key markets in Europe, the Middle East and Africa, plus India, serving large, medium and small-sized companies.

GoPro frees people to celebrate the moment, inspiring others to do the same. From cameras and drones to apps and accessories, everything we do is geared to help you capture life as you live it, share the experience and pass on the stoke. We believe that sharing our experiences makes them more meaningful and way more fun.

GoPro was founded in 2002 by Nick Woodman—a surfer, skier and motorsports enthusiast in search of a better way to film himself and his friends surfing. What started with a 35mm camera and a wrist strap made from old wetsuits and plastic scraps has grown into an international company that has sold over 26 million GoPro cameras in more than 100 countries.

But it’s the millions of passionate GoPro users around the globe who bring the magic to life. They humble and inspire us every day with incredible creativity that helps us see the world in an all-new way—and fires us up to keep creating the most awesome, innovative products possible.

HP (Hewlett-Packard) is a multinational information technology (IT) company that sells hardware, software and related business services. ... The company's corporate culture is encapsulated in an approach known as the HP Way, a set of values designed to foster innovation, respect for individuals and value for customers, company headquartered in Palo Alto, California.

Kodak Alaris is a manufacturer and marketer of traditional photographic supplies (including film, paper, and processing chemicals), hardware and software for digital imaging and information management, and retail printing kiosks. The company is headquartered in Hemel Hempstead, Hertfordshire.

Life’s Good with LG and its range of products. Begin by transforming your TV viewing experience and enjoy the thrill of premium TV/Audio/Video, with LG India’s superior TV viewing technology. Enjoy the next level TV viewing with widest range of Nanocell TVs, LED and OLED TVs , 4K Resolution, and Smart TV.

Philips India Limited is a subsidiary of Royal Philips of the Netherlands, a leading health technology company focused on improving people’s health and enabling better outcomes across the health continuum from healthy living and prevention, to diagnosis, treatment and home care. Philips leverages advanced technology and deep clinical and consumer insights to deliver integrated solutions. The company is a leader in diagnostic imaging, image-guided therapy, patient monitoring and health informatics, as well as in consumer health and home care.

Zebra empowers those on the front line in retail, healthcare, transportation and logistics, manufacturing and other industries to achieve a performance edge - an edge that translates to delighted customers, good patient outcomes and superior business results.

As the pioneer at the edge of the enterprise, our products, software, services, analytics and solutions are used to intelligently connect your people, assets and data. With decades of industry experience, we design with front-line users and workplaces in mind, giving you the best-action guidance needed to optimise in-motion operations and make business-critical decisions.

With over 10,000 partners across 100 countries, we are committed to delivering industry-tailored solutions that help our customers capture their edge.

Angel Broking is an Indian stockbrokerage firm established in 1987. ... The company financial services Their services include online stock broking, depository services, commodity trading and investment advisory services. Wealth management solutions such as personal loans and insurance are also delivered by this company.

Axis Bank is the third largest private sector bank operating in India. The bank was established in 1993 and began its operations in 1994. Axis Bank has a large network of 4,050 domestic branches with 11,801 ATMs and 4,917 cash recyclers spread across the country (as on March 31, 2019).

Deutsche Post DHL is the world's largest logistics company, now in over 220 countries and territories worldwide, particularly in sea and air mail. The company delivers over 1.3 billion parcels per year. ... Today, DHL Express shares its DHL brand with business units such as DHL Global Forwarding and DHL Supply Chain.

Established in 2011, Edelweiss Tokio Life Insurance Company Ltd is a new age life insurance player in India. It is a joint venture between Edelweiss, a leading financial service company established in India and Tokio Marine, one of the fastest growing life insurance companies in Japan.

HDFC Bank Ltd. is an Indian banking and financial services company headquartered in Mumbai, Maharashtra. It has a base of 111,208 permanent employees as of 30 September 2019. HDFC Bank is India's largest private sector lender by assets. It is the largest bank in India by market capitalisation as of February 2016.

HDFC ERGO is a 51:49 joint venture firm between HDFC and ERGO International AG, one of the insurance entity of the Munich Re Group in Germany operating in the insurance field under the BFSI sector. The company offers products in the retail, corporate and rural sectors.

Housing Development Finance Corporation Limited is an Indian financial services company based in Mumbai, India. It is a major provider of finance for housing in India. It also has a presence in banking, life and general insurance, asset management, venture capital, realty, education, deposits and education loans.

HDFC Realty is the group's offline brokerage business with a presence across residential and commercial properties as well as consulting and valuation services. It has a 300 member in-house sales team and 7,000-strong brokers across the country.

HSBC Holdings plc is a British multinational investment bank and financial services holding company. ... The origins of the bank lie mainly in Hong Kong and to a lesser extent in Shanghai, where branches were first opened in 1865. The HSBC name is derived from the initials of the Hongkong and Shanghai Banking Corporation.

Kotak Mahindra Life Insurance Company Limited is a private Life Insurance company in India. The company was founded in 2001. It caters to 15 million customers. ... Under the umbrella, the company offers various protection plans, savings and investment plans, child plans and retirement plans.

The National Stock Exchange of India Limited (NSE) is India's largest financial market. Incorporated in 1992, the NSE has developed into a sophisticated, electronic market, which ranked fourth in the world by equity trading volume in 2015.

The Saifee Hospital is a hospital built in the Charni Road region of Mumbai, India. Syedna Mohammad Burhanuddin dedicated the hospital to the memory of his revered father, Syedna Taher Saifuddin.

Sun Pharmaceuticals was established by Mr. Dilip Shanghvi in 1983 in Vapi, Gujarat with five products to treat psychiatry ailments. ... Today, it is the largest chronic prescription company in India and a market leader in psychiatry, neurology, cardiology, orthopedics, ophthalmology, gastroenterology and nephrology.

Tata Capital Limited is a financial and investment service provider in India. It is based in Mumbai and has more than 100 branches across the country. The company offers consumer loans, wealth management, commercial finance, and infrastructure finance, among others.

Tata Power Limited is an Indian electric utility company based in Mumbai, Maharashtra, India and is part of the Tata Group. ... With an installed electricity generation capacity of 10,577 MW, it is India's largest integrated power company.

WNS Global is a global business process management company headquartered in Mumbai, India. It has more than 41,000 professionals working in 60 "delivery centers" across the world, including China, Costa Rica, India, the Philippines, Poland, Romania, South Africa, Spain, Sri Lanka, Turkey, the United Kingdom, and the United States. Adrian T. Dillon is the Chairman of the Board and Keshav R Murugesh is the group CEO and chairman of Nasscom.